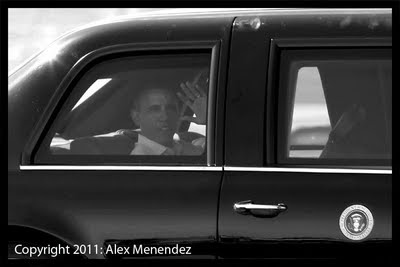 I had no idea what this photo would mean when I took it on Friday.
I was hoping to photograph President Barack Obama when he visited the Vehicle Assembly Building at the Kennedy Space Center after the announced scrub of Endeavour’s STS-134 launch. The first lady and his daughters were with the President to watch the launch and to speak for a few moments with Gabby Giffords, the Congresswoman who was shot in Arizona and the wife of shuttle Endeavour Commander Kelly.
The motorcade arrived about 30 minutes after 5 helicopters began hovering around the property, and it was past us in about 10 seconds. Of course Barack was on the opposite side of us and Michelle waved as their cars drove by.
About an hour later, we all hoped the motorcade would leave in the same direction and they did….I pressed the button on the camera and nailed the image we see here!
Today, just two days later, I learned that just hours after these images were taken, President Obama would approve a military strike in Pakistan on Osama Bin Laden which would result in the death of the terrorist and mastermind of the 9/11 attack on the Twin Towers.
Sitting here typing this, I admit it feels weird to think of all the problems Obama has to deal with on a daily basis. Perhaps I should feel lucky with how much pressure I don’t have to endure every hour that I am awake…..photography doesn’t seem that hard anymore.
More pics here: http://alexmenendez.photoshelter.com/
Image taken on April 29, 2011. (Photo Credit: Alex Menendez)
Also posted in 9/11, Alex Menendez, attack, Barack Obama, Endeavour, First lady, Instinct Films, KSC, motorcade, NASA, Osama Bin Laden, Pakistan, STS-134 | Comments Off on President orders attack on Osama Bin Laden 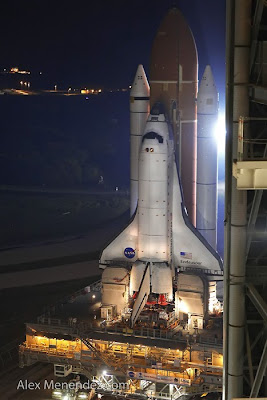 Shuttle Endeavour rolled out last night from the Vehicle Assembly Building and headed over to Launch Pad 39A. This is mission STS-134 and is scheduled to blast off on April 19, 2011. I had the really cool chance to photograph this from inside the VAB and was so glad that I drove all the way to Kennedy Space Center and did it. I love the way the shuttle lights up with the Xenon lights hitting it and couldn’t get over how big the building and the Endeavour actually are.

The space program at KSC seems to be winding down, (which sucks), and this is the last ever launch of Endeavour, so I will put out as many remote cameras as I can and pray for a successful mission.
Thanks to all who helped me at the VAB and to all of the folks at NASA.
Also posted in Endeavour, Kennedy Space Center, NASA, Space Shuttle Endeavour, STS-134 | Comments Off on Shuttle Endeavour Roll Out

Shuttle is a go! 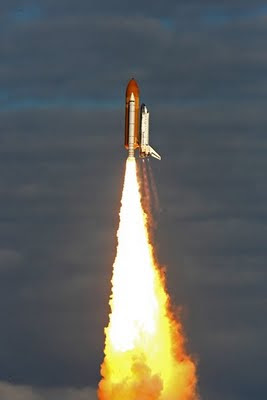 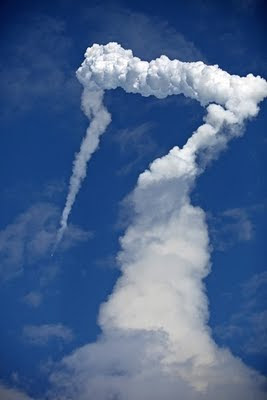 Where has the time gone? I know, I know,….I have been VERY busy trying to run 3 businesses, shoot, travel, edit and play with my 2 youngsters…..all while trying to sell more business. If you are in the media/ad business then you know exactly what I am talking about. Anyhoo, here comes the first of what should be a slew of updates coming your way soon, I promise. Lets start with a few very quick posts on the Shuttle-129 mission that I shot about a month ago. I am doing a story on Astronaut Leland Melvin, a former NFL football player and his training methods… Look for the article in the January issue of OrlandoSportsMag.
Here are a few quick snaps that I edited for your viewing pleasure. I will get caught up over the Holidays….enjoy!
Also posted in Kennedy Space Center, Launch, Leland Melvin, NASA, space | Comments Off on Shuttle is a go!