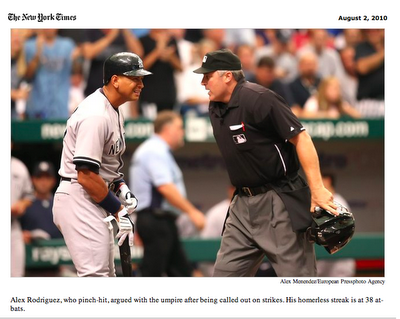 Shot for the European Pressphoto Agency when the Yankees and Alex Rodriguez came to Tampa for a MLB baseball game. A-Rod was chasing his 600th home run and I was hired to document it if he so happened to hit it. Unfortunately, Alex did not start the game and the sold out crowd was pretty upset. Before the 7th inning began I sauntered over to the first base dugout and was the only shooter in position when Manager Joe Girardi announced A-Rod was entering the game.

After being called out on a close pitch, Alex argued briefly with the home plate umpire and I captured this image. It ran both on-line and in print the next day in the New York Times.
Also posted in Alex Menendez, Alex Rodriguez, dugout, EPA, MLB, New York Yankees, Tampa Bay Rays | Comments Off on A-Rod misses 600