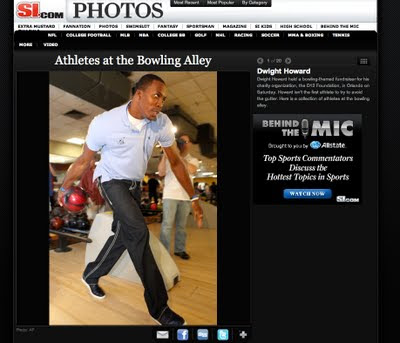 Dwight Howard brought his D12Foundation to the Altamonte Springs AMF bowling alley this past weekend. There were plenty of kids there and they had a blast with Dwight and other members of the Orlando Magic family.

The media was out in full force and they did their best to try and ask Dwight about the upcoming NBA lockout, he would have none of that however, stating that he had 2 new jobs in mind if the lockout happened. He would (1) raise chickens and give them steroids for bigger bodies, or he would (2) move to Canada to take up the Olympic sport of curling…….?
Whatever he decides to do will be just fine with me, as long as he keeps his head on straight and continues to help the kids that look up to him!
For more info log onto www.D12Foundation.com
Image published in the lastest Sports Illustrated online photo gallery.
Thanks for looking.
Also posted in Alex Menendez, bowling, D12 foundation, Dwight Howard, online, Orlando Magic, Sport Illustrated | Comments Off on Dwight Howard Bowling in SI 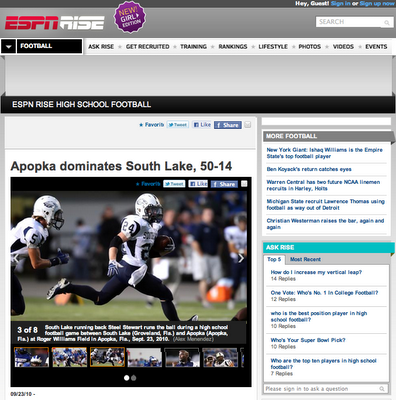 ESPN has a magazine called “Rise” that features high school athletes who are highly sought after by NCAA colleges across the U.S..

Recently, the network featured a nationally televised football game between South Lake, Florida and Apopka, Florida. I was contracted to provide photos for the website as well as the magazine. The job itself was fun to shoot and I am glad that they brought in extra lights to illuminate the stadium, when you are use to shooting in NCAA and NFL stadiums, we photographers get spoiled I guess.
The game was fun and I can’t wait to shoot more for the magazine.
Also posted in Alex Menendez, Apopka, ESPN, Football, high school, Rise, SouthLake | Comments Off on ESPN Rise magazine