Rookie NASCAR Nationwide driver Kyle Larson was having one heckuva week at his first ever Daytona International Speedway Speedweeks. He took second place in the ARCA race on the track and captured first place in the special night race that the track held for drivers. He never imagined however how his week would end, with him being the centerpiece of one of the most spectacular crashes the track had ever featured. It was the final lap of the Nationwide Series opener, the Drive4COPD event, that was being broadcast live across the world.

Larson was in the top 10 coming out of turn 4 and in racing for a top 5 spot, he got tangled up with a few other cars as they raced near 200 mph down the front stretch.  As race winner Tony Stewart was crossing the finish line with almost every camera focused on him with the checkered flag a wavin……a mere 300 yards behind him, all HELL was breaking loose! 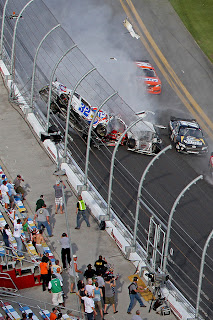 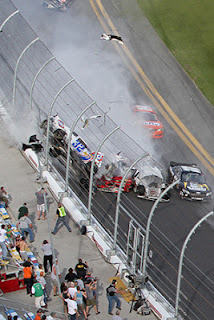 Larsons car got tangled with a few others and the newly designed “Generation 6” car flew like a kite up against the catch/safety fence, spitting fire like an angry dragon. His racecar slapped right up in to the safety barrier about 15 feet in the air, with parts flying off like it was a lego toy. The madness only took about 3 seconds before the sound diminished into screaming fans, blood and utter chaos. As the race winner was being announced over the P.A. system and lightbulbs were flashing, the smoke started to settle, and cries for help could be heard coming from a few of the lower sections of seating.

Larsons car came to a rest on the infield, with the entire front half of the vehicle missing….he had left the entire front portion of the car, engine included, in the front sections of the grandstands.  An entire wheel, not just the rubber, but the rims and axles, as well as his entire engine had appeared to fly through the fencing and was burning at the feet of the security personnel standing in the front row.  Shards of metal, plasting and glass had sprayed the crowd like fireworks that had been lit on the pavement.  Chaos ensued and the medics were scrambling like pissed off fire ants to the scene. The burning engine block was quickly extinguished as the smoke began to rise into the already heated stands, and the television folks began to scan the victims with their broadcast cameras.

To say the tone was quickly turned down is an understatement, even Tony “Smoke” Stewart, the race winner, didnt celebrate like he should have, he said thanks and wished the best for the injured fans. The next day he would visit those same gearheads in the local hospital.

I was filming from the roof and after 15 races, can honestly say Ive only captured the race winner 1 time, when I could see that there would be no crash on that final lap, this time I felt it and decided to hold off on the winner once again. The following frames are the exact reason why I held off……..pure Instinct.

I am so glad that no one was seriously injured in this crash, and glad the race organizers were smart enough to place this catch fence when they did. Many worse things could have happened here, and Larson was the luckiest of all…. 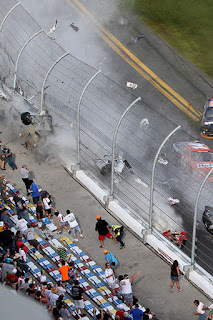 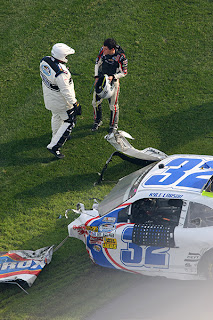 More images can be found at this link below.