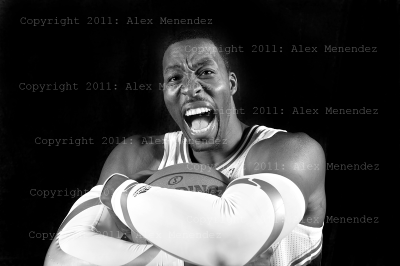 It annoys me when I show up for a shoot and one critical piece of gear is missing or broken….well, it happened to me this past Monday. The Orlando Magic were holding their annual “Media Day” event and the only story in town was that Superstar Dwight Howard had requested a trade from the team! Every sports station, radio, tv , newspaper and magazine was there to see what he had to say. Me, I just needed archive images for Orlando Sports Magazine, if Dwight was actually on his way out of town. (Thanks to Melanie and Joel once again for the access).

So the first thing I did was find my spot on the gym floor to set up, making sure that there was power and plenty of room for those that did not bring their portable lights. Most folks there will hover around the tv guys with their on-board lights and snap stills over their shoulder, unbeknowst to the videographers. Well, as tradition, they have a tendancy to hover around me until the player poses and then multiple flashbulbs blind the athlete until he can no longer see, paparazzi to the fullest…
Anyways, I opened and set my backdrop, set stands and lights and found the necessary power supplies….formatted cards, set camera to Raw/Jpeg and then went to grab the sync cord……..um,….the sync cord. Dang, “Now where did I put that?”….I always carry 2 cords just in case one fails…….hmmm………oh yeah, I was checking lights with my 8 year old a few days back, and we decided to put them back into the Pelican case, not the ThinkTank bag…NOT GOOD! I had the ThinkTank with me now..
Pocket Wizard time, but I only carry one set of these as I hardly ever use them….time to make my own magic…..I was able to put the transmitter on the camera and the only other receiver on my main light….I would just have to let the first light trigger the second light…..with absolutely no back light now……bummed to say the least!!!
The original plan was to set two lights at 90 degrees (aiming directly into the subjects ears) and then front light them with a ring flash much as I did last year. But now that my hotshoe was being used by the PocketWizard, that option was off the table….
My lack of properly preparing my gear came back to bite me in the butt…..
Regardless, you can only do what you can do so I simply pressed on. All of the players themselves were in a good mood it seemed, but the atmosphere was beginning to get tense an hour in, Dwight had not been seen or heard from by anyone.
Then suddenly, like someone had yelled “Fire”, everyone moved to the center of the gym and surrounded the basketball logo on the floor. It looked like a giant donut, 5 people deep, with cameras, lights and mic boom poles everywhere. Dwight entered the gym much like Muhammed Ali would have back in the 70’s, and after stopping for a brief moment to talk to a coach, he slowly glided across the floor to the buzzing entourage of English/Spanish/Italian? voices all clamoring to ask him about his future…..
……meanwhile, still photographers Fernando, Gary, John and myself all hung WAAAYYYY back and watched as the madness unfolded….scary and funny at the same time…..It sounded like honeybees surrounding the Queen……….had it been me, I probably would have run away!
Then it ended.
Dwight was gone just as quickly as he had arrived, and after about 30 minutes, the gym had a calm, eerie feeling to it. Of the 150 media members that had been in attendance, about 25 remained, not waiting for one-on ones with anyone else….They came, they conquered…….they bolted.
Three hours later the only ones in the gym were us photographers, CEO Alex Martins, and various communications people from the Magic. Almost all were on the phones speaking, texting or twittering…. then out of nowhere, Dwight came in again… He was ALL smiles, jumpy and very much alive…a few hellos to everyone and then it was GAME TIME!!! When he finally made it over to the last station, (mine), he smiled that pearly white smile, gave me a high five and a hug and we talked about our Haiti adventure together….I had seen him a few times over the summer but not as happy or as loose as today……I grabbed some hilarious frames of him acting like a kid, a happy kid, and then he was on his way, one last interview before heading home…
I packed up as quickly as I could, minus sync cord, and was out the back door.
No matter his choice, I sure hope Dwight decides to finish out his career here in Orlando, he is so much more than “just a baskeball player”! He actually gives back through his various charities and events, even those many of us have never heard about…….
More Images to view here:
http://alexmenendez.photoshelter.com/gallery/Orlando-Magic-Media-2011/G0000HD4QUs7TteU/
(Hey Dwight….I would take the elephant over the pint!)……better choice
This entry was posted in Alex Menendez, D12 foundation, Dwight Howard, Media Day, NBA, Orlando Magic.